An ambulance first had rushed her, with respiratory failure, to an emergency room one day; he was admitted the next night.

“You may not make it through the night,” she recalls a physician telling her.

Bunch, now recovery at home, says she felt helpless. “You have no control.”

The state’s health department estimates that more than 70 percent of the virus in the state is the more infectious — possibly more dangerous — Delta variant.

At Springfield’s Mercy Hospital, the rapid spike in hospitalizations left administrators scrambling to borrow ventilators from other hospitals. At the city’s CoxHealth hospital system, 90 percent of coronavirus patients had the Delta variant.

He added, “We are going to get worse over the next couple weeks. Certainly people are out doing a lot more things. I think there’s a lot of people that have less concern about the virus. Now we don’t have a very high percentage in this area of people who are vaccinated.”

Missouri is not alone.

More than 9 million people live in 173 US counties with Covid-19 case rates at or more than 100 cases per 100,000 people in the last seven days and with vaccination rates lower than 40%, Dr. Rochelle Walensky, director of the CDC, said at a White House briefing on Thursday.

More than 90% of those counties also have a vaccination coverage of less than 40%, according to Walensky.

“Many of these counties are also the same locations where the Delta variant represents the large majority of circulating virus,” Walensky said.

“Low vaccination rates in these counties, coupled with high case rates — and lax mitigation policies that do not protect those who are unvaccinated from disease — will certainly, and sadly, lead to more unnecessary suffering, hospitalizations and potentially deaths.”

In fact, a new data analysis has identified clusters of unvaccinated people, most of them in the southern United States, who are vulnerable to surges in Covid-19 cases and could become breeding grounds for even more deadly variants.

The analysis by Georgetown University researchers identified 30 clusters of counties with low vaccination rates and significant population sizes. The five most significant clusters cover large swaths of the southeastern US and a smaller portion in the Midwest. The clusters are largely in parts of eight states — from Georgia to Texas and southern Missouri.

About one-third of Americans have not received a Covid-19 shot.

Katie Towns, acting director of the Springfield-Greene County Health Department, said the county — population about 300,000 — had 240 Covid-19 cases just on Wednesday and 17 deaths in the last two weeks. About 39% of its residents are fully vaccinated, according to health department website.

“We’re not a huge community,” she said of the 240 cases. “That’s a really large number and we haven’t seen these numbers since we had a surge back in December and January.”

About 56% of adults in Missouri have received at least one Covid-19 vaccine dose and 39.4% of residents are fully vaccinated, according to CDC data.

In Taney County, where the southwestern Ozark city of Branson is a huge tourist draw, about 25% of its roughly 56,000 residents are vaccinated.

“It runs the gamut,” Lisa Marshall, director of the Taney County Health Department, said of the hesitancy to the vaccine. “Maybe they just want to wait and see or … it’s not quite ready yet. Maybe they’re just not someone that vaccinates. We’ve also heard a little bit of concern over how quickly the vaccine was developed.”

Overall, data shows that Covid-19 is expected to swell in less vaccinated communities, especially as the Delta variant continue to spread in those areas.

In Missouri, a federal surge team deployed there is to include an epidemiologist, research assistants, a health communication specialist, contact tracers and others who will help with vaccination and outreach, according to the health department. The teams include members of CDC, the Department of Health and Human Services, and the Federal Emergency Management Agency

“We have a CDC representative helping us with … investigating the (Delta) variant and its presence here in our community,” Towns said. “But we just have … one representative right now. We’ll gladly accept the additional resources.”

At the 500-bed CoxHealth hospital system, Jarvis said nearly all of the new Covid-19 admissions have been unvaccinated younger patients.

“This is going to keep happening,” he said of the latest surge in cases. “It may peak here and then it’s going to spread to other places. If we don’t get enough vaccinated there’s going to be another variant that’s probably worse. It’s just that’s the way viruses work.”

Couple, sick with Covid-19, holds hands in the ICU

In Rogersville, Louie Michael said he and wife Pattie Bunch, a nurse, had been “dragging our feet” since the spring about getting a Covid-19 vaccine. In mid-June, Bunch got sick.

“It felt like a bomb dropped on me,” said Bunch, who is still recovering less than a month later. “I just wasn’t feeling good at all. And I thought, ‘Oh, no.'”

An ambulance rushed her to the hospital with respiratory failure on June 17. The next night, Michael, an entertainer, had to be rushed to the same emergency room in Springfield. A nurse eventually put them in the same ICU room, where Michael took a snapshot of them holding hands.

“We didn’t know how it was going to turn out,” said Michael, who along with Bunch urges people to get vaccinated. “We didn’t know if we’d get to go back home.”

“Or see our kids again, or our family or grandson,” she said.

“It could have just ended that night,” said Michael, who has been with Bunch for 30 years. “It made mad. I didn’t want it to end that way. It’s not supposed to end that way… and unfortunately, it’s ending for a lot of people that way.” 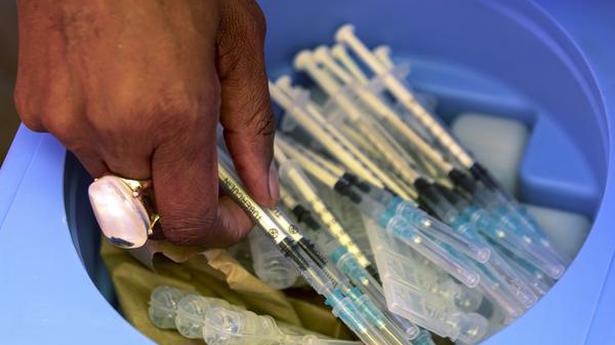